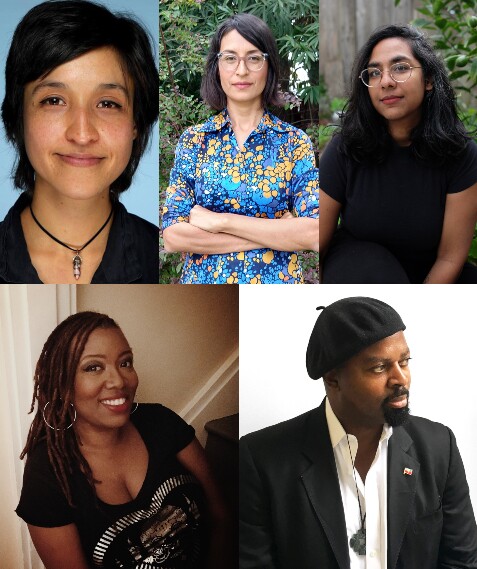 One benefit to being a short story writer is that you’re always traveling somewhere new.

It can be a place identifiable on a map — like a road in Lagos, Nigeria. “You walk into certain places,” said novelist Ben Okri, ”…and a history you don’t even know about breathes up through your feet, and effects emotions in you that you didn’t even know it was possible to feel. Place can do that.” Okri has written deeply about Nigeria in magical realist novels like “The Famished Road,” which won the 1991 Booker Prize. But his new story collection, “Prayer for the Living,” spans the globe.

Grief can also be a place, according to author Shruti Swamy — a realm in which we’re able to push through the “very porous skin between reality and beyond … it can be kind of a transcendent and universal state.”

Swamy and Okri joined writers Carribean Fragoza and Deesha Philyaw for a Los Angeles Times Festival of Books panel about the art of the short story, moderated by Times reporter Dorany Pineda. The hour-long conversation was a deep dive into an often overlooked literary form that can be far more expansive than its page count.

Its power lies in its brevity, Swamy explained. “Every sentence has to be perfect, and can be,” she said. She reviews every line several times in her stories — a level of care and finesse that is hard to achieve across the sprawl of a novel. In that medium, Swamy argued, imperfection can be a strength.

Author of the recent collection “A House Is a Body,” Swamy noted that some of the best short stories — like those in Philyaw’s collection “The Secret Lives of Church Ladies” — possess a “magic trick” in which they open up “like a pop-up book — like the whole world comes out in a couple of pages.”

Philyaw shared the first line of one of her stories, “Peach Cobbler,” by way of giving advice to new writers: “My mother made a peach cobbler so good it made God himself cheat on his wife.” The line, the first thing Philyaw came up with, birthed the rest of the story by piquing the author’s curiosity: Who was the child speaking this line? Why did she think her pastor — Philyaw knew it was a pastor — was God? And what about this really good peach cobbler?

Writing can sometimes be like solving a math equation, Philyaw said: Once you have a beginning, like a thought or line of dialogue, interrogate it until you have your answers.

But sometimes it helps to take a more impressionistic approach. “Write down that voice that pokes through and then return to it, and really listen to it and let it speak,” said Fragoza, author of “Eat the Mouth That Feeds You.” To her, keeping this voice true and free of expectations is a crucial first step before the analytical mind kicks in.

In sum, there is no more of a set process in constructing a tight piece of short fiction than there is in organizing an epic. Okri, the veteran author of the group, said his process has changed often through the years. “Certainty is the enemy of writing,” he emphasized, noting the importance of embracing the unknown in producing art. “It is being comfortable with anxiety and uncertainty, and just writing your heart out and reading with passion, and making friends with life.”

The panelists also took the occasion as an opportunity to pay tribute to the women who inspired them. Fragoza, a native of El Monte, found her muse in Helena Maria Viramontes, an East L.A. writer whose stories “gave me permission to write complicated female characters in ways that I had not seen on the page before.”

Viramontes’ writing gave Fragoza the push she needed to tell stories about women that would make others uncomfortable — stories that would more closely resemble real life.

When examining their beginnings as writers, both Philyaw and Okri think of their mothers.

Okri attributed his fascination with storytelling to his mother’s skill in telling her own. Each of her tales was rife with mystery, delivered with a power that he says “just made me listen, think, look at the world and myself,” sometimes decades after she first delivered it. Once used as a way to get her rambunctious son to settle down and focus, the stories became a template for the author’s own writing.

When Philyaw lost her mother in 2005, she was imbued with a sense of urgency to pursue her dreams — in honor of the dreams her mother never achieved. “I felt like when she passed away, I got marching orders to do whatever it was that I wanted to do with my life. And that has been writing.”