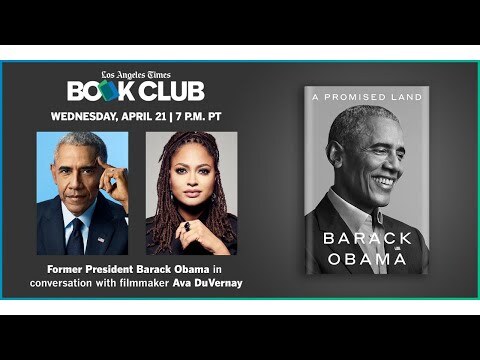 Every month, The Times invites all of Los Angeles to read the same book, then hosts a discussion with the author. “A Promised Land” is the book club’s April selection.

Obama joins book club readers for a conversation about his bestselling memoir with DuVernay, an award-winning writer, producer and director who grew up in Long Beach.

“A Promised Land” is the first of two volumes about Obama’s life and improbable road to the White House. His story begins with a young man struggling to find his place in the world, a journey that starts in earnest when he arrives in Los Angeles in 1979 to attend Occidental College.

In this excerpt from Chapter 1, Obama describes his political awakening in Southern California as a college freshman. “What did capture my attention was something broader and less conventional — not political campaigns but social movements, where ordinary people joined together to make change,” he writes. “I became a student of the suffragists and early labor organizers. … Most of all I was inspired by the young leaders of the civil rights movement — not just Dr. King, but John Lewis and Bob Moses, Fannie Lou Hamer and Diane Nash.”

Times White House reporter Eli Stokols calls “A Promised Land” a fast-moving narrative that “puts the reader in the room at defining moments.” This volume covers the first 2½ years of Obama’s presidency and concludes with the killing of Osama bin Laden. “The ticktock of the raid’s secret planning and execution is exhilarating, but Obama reflects on the cathartic euphoria of the aftermath,” Stokols says in his review.

Sign up for the Book Club newsletter for the latest news and events.