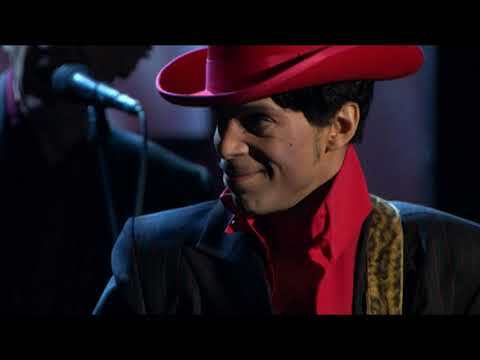 Music fans who hang around YouTube have likely seen the 2004 Rock and Roll Hall of Fame clip of Tom Petty, Jeff Lynne, Steve Winwood and Dhani Harrison performing the Beatles song “While My Guitar Gently Weeps” during George Harrison’s induction ceremony. If so, they’ve seen Prince, off to the side during the verses, casually walk to center stage as the bridge approaches and proceed to pour forth a guitar solo so achingly beautiful that it’s become canon.

Last week, seemingly out of the blue, veteran TV producer Joel Gallen, who directed and produced the original Hall of Fame broadcast, uploaded a re-edited version of that performance with a simple comment: “17 years after this stunning performance by Prince, I finally had the chance to go in and re-edit it slightly — since there were several shots that were bothering me. I got rid of all the dissolves and made them all cuts, and added lots more close-ups of Prince during his solo. I think it’s better now. Let me know what you think. Joel.”

It’s better now, Mr. Gallen, and the timing is spot on because sometime in the past week, during which fans lovingly marked the fifth anniversary of Prince’s death, the original version of that performance surpassed 100 million views on YouTube. From a visual perspective, this re-edit improves on the televised version. What was once phenomenal footage that seemed to be caught off guard by Prince’s magic has been subtly transformed, through expert editing, to illuminate the solo that shook the hall. Better angles. More close-ups. A number of split-screen shots that beam in on Prince’s fretting fingers. More Prince.

A few teaser angles find the artist discreetly preparing for his close-up, eying his bandmates as if he’s at a 7 a.m. pancake breakfast getting ready to suggest a basketball game. “Look at you all,” sings Petty. “Still my guitar gently weeps,” reply Lynne, Winwood and Dhani Harrison in harmony. Then the camera shows Dhani with an excited grin on his face as Prince moves to center stage.

The solo? A work so virtuosic that little red Corvettes are crammed with the bodies of writers who have attempted to describe It.

For Prince fans — and pretty much everyone with a soul who sees it — Gallen’s re-edit further underscores Prince’s genius on the electric guitar.

From a historical perspective, this new version also confirms a legend regarding the end of that performance. The original video concludes with the song’s coda, and we briefly see Prince leaving the stage. Witnesses said Prince declined applause and left the stage. Gallen’s version ends with a shot from the back of the theater that confirms the rumor. We see Prince exiting stage left, but we also watch Petty, Lynne, Winwood and Harrison still accepting the applause — as the Purple One’s silhouette pushes through a backstage curtain and vanishes into the night.