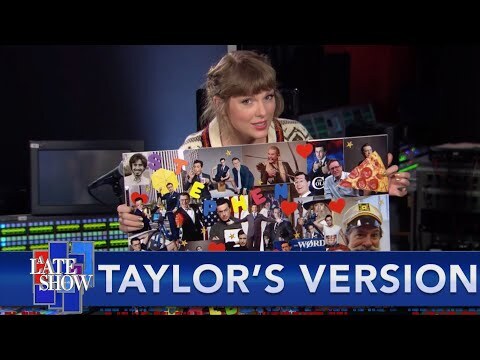 Taylor Swift is being cryptic yet again.

This time, the singer-songwriter’s appearance on the “The Late Show With Stephen Colbert” quickly turned fans into detectives as they pieced together speculation that her next album will be a rerecording of “1989,” her fifth studio release.

Swift kept making “1989″ references as she discussed whether Colbert was the inspiration for a song from her 2008 album, “Fearless.”

“‘Hey Stephen’ is not about you any more than my album ‘1989’ is about that year you spent waiting tables on the lunch shift at Scoozi, an Italian restaurant in the River North area of Chicago that, by the way, serves an incredible slice of pizza,” she said.

Swift also alluded to songs on “1989,” such as “Shake It Off,” and made another connection by stretching an answer to mention New York, which may be associated with “Welcome to New York,” the album’s first track.

Not all of Swift’s hints were direct. Some, such as a reference to Stephen King’s “The Dark Tower” books, were more subtle and puzzling.

“I’ve never revealed this before to anyone, but ‘Hey Stephen’ is about Stephen King,” she said. “He’s amazing. The Dark Towers series changed my life, plus ‘The Shining,’ ‘The Stand,’ and don’t even get me started on his short stories. Absolutely luminescent.”

Fans quickly began forming theories as they inspected the hints that the “Love Story” singer, who won an album of the year Grammy for “1989,” seemed to drop throughout the interview.

SHE MENTIONED 1989, SHAKE IT OFF, LAW AND ORDER WHICH TAKES PLACE IN NY. THIS WHOLE INTERVIEW SCREAMS 1989 TAYLOR’S VERSION pic.twitter.com/9uqaOcBbxy

Although no official announcement has been made, that hasn’t stopped the Swifties, Swift’s fan base, from theorizing about a possible release date.

hey stephen is 4:16 minutes long. 4/16 is this friday and in the interview she made several 1989 references. this friday she will announce 1989 (Taylor’s Version). MARK MY WORDS.

Last week, Swift released her first rerecording, dubbed “Fearless (Taylor’s Version).” The redone album features 26 tracks, including previously unreleased songs. And since Swift is the gift that keeps on giving, who knows what she has in store this time around.