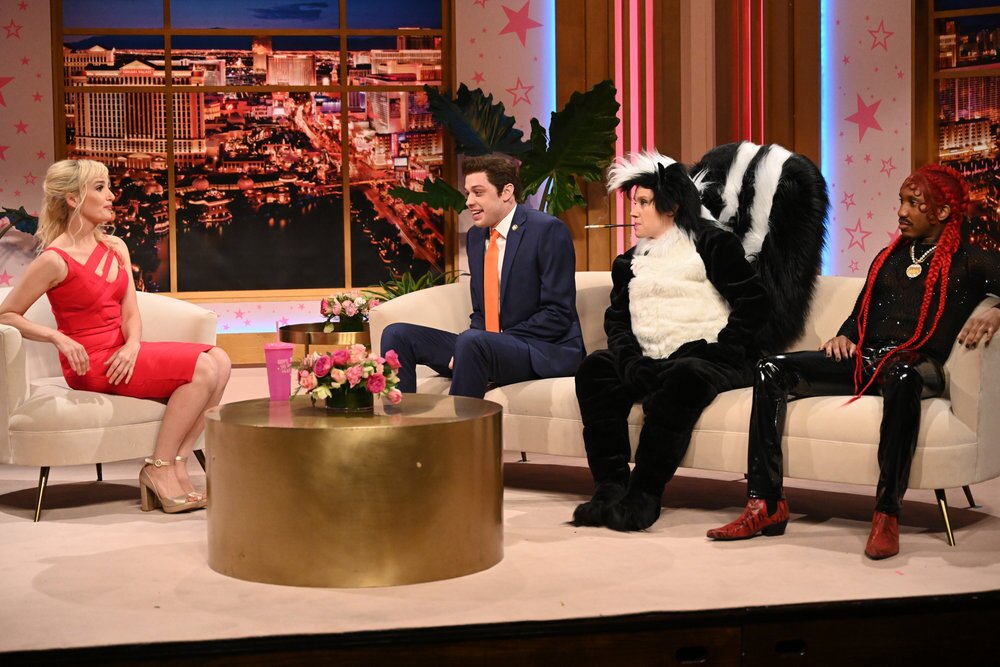 Last night, “Saturday Night Live” roasted several high-profile people who were the subject of controversy over the past week including Congressman Matt Gaetz, Lil Nas X and YouTuber David Dobrik.

First-time host and Oscar nominee Daniel Kaluuya opened the show with a monologue about race and racism. “I know you’re hearing my accent and thinking, ‘Oh no, he’s not Black, he’s British!’” he said. “Let me reassure you that I am [both]. Basically, I’m what the royal family was worried the baby would look like.

“People ask me what’s worse — British racism or American racism,” he added. “Let me put it this way. British racism is so bad, white people left. They wanted to be free to create their own kinds of racism. That’s why they created Australia, South Africa and Boston.”

He also mentioned his Golden Globe Zoom snafu where upon winning the supporting actor trophy for his role as Chairman Fred Hampton in “Judas and the Black Messiah,” he began his acceptance speech while on mute.

“I was muted, can you believe that?” he said, adding a reference to his role in “Get Out.” “I told the best joke of my life and I was muted! I felt like I was in the sunken place.”

On “Weekend Update,” host Colin Jost took several jabs at Gaetz (R-Fla.), who is under investigation for an alleged sexual relationship with an underage girl, among other things.

“Because Gaetz believes that only voters should have to show ID,” said Jost, who also joked that the congressman “looks like a caricature artist’s drawing of me.”

“It’s also being reported that Gaetz may have paid for sex with women he met online,” said Jost about the unsubstantiated allegations. “That story has since been confirmed by his whole vibe. Gaetz then defended himself releasing this very normal statement …

He followed up with one last dig: “Here’s the craziest part of this story to me: A sitting congressman is being accused of child trafficking and the QAnon people are suddenly like, ‘Nah, I need more evidence.’ That was your whole thing! I mean, come on. Come on, think about it: Matt Gaetz’s girlfriend, she was allegedly 17. The 17th letter is Q, it all adds up! What are you waiting on! The storm is finally here and QAnon is like, ‘You can’t believe everything you read on the internet!’”

It should be noted that no charges have been brought against Gaetz, who was also the subject of the episode’s cold open, which saw a return to the Britney Spears (Chloe Fineman) talk show “Oops, You Did It Again.” He was joined by fellow “social pariahs” Lil Nas X (Chris Redd) and Pepé Le Pew (Kate McKinnon).

Gaetz (played by Pete Davidson) was introduced by Spears as a “full-on sex pest.” “People are just targeting me because I defended Donald Trump,” he said.

“And what has Trump said in your defense?” she asked. “Squat,” he admitted. When asked whether the allegations might hurt him in the next election, he said, “Weirdly, in my district, they might help. But come on, I’m just like Pepé here, I’m just a lady’s man.”

“Dude no,” replied McKinnon as Pepé Le Pew, who was cut out of the upcoming “Space Jam: A New Legacy.” “I am a cartoon skunk, you are a U.S. congressman. Be better, OK?”

In response to his own controversial decision to sell Nike sneakers containing human blood, Lil Nas X said, “I don’t know why Nike is so mad. Their whole thing is, ‘Just do it.’ Well, I did it.”

He was also asked about his recent music video for the song “Montero,” in which he is depicted giving Satan a lap dance. “People are afraid of me because I’m different, but really I’m just your typical gay, Black, country, rap sneaker entrepreneur. I put my pants on like everyone else: one assless chap at a time.”

Spears asked whether he’d be willing to give a lap dance to God to even things out, which he did. “Happy Easter, everyone!” she said.

The show also apparently roasted YouTuber David Dobrik, who was dropped by sponsors after sexual abuse allegations were made against his Vlog Squad members. Former members of the group also accused Dobrik of tricking them into taking part in “traumatizing” content.

In a sketch called “Viral Apology Video,” cast member Kyle Mooney posed as a fake YouTuber named Markey Monroe, with Kaluuya standing in as JP, a member of the Prank Posse.

“Some things from my past have come to light and I would like to address those allegations now,” Monroe addressed the camera. “They’re all true and they’re all very bad. I’ve been bad to girlfriends, best friends, co-workers, parents, pets and, frankly, my God. But I want y’all to know I’m sorry. Just know I’m learning and growing as we speak.”

After posting a new prank video where he dropped a TV on JP’s head, Monroe posted another apology video. “It did not occur to me that I could hurt my friend, I am so sorry,” he said.

“And I know a lot of you thought my last apology was insincere. You were right, I was lying. But this time, I mean it. It was cool and it was funny, but it was wrong. That’s why out of respect we’re going to delay the release of the ‘Tricking JP Into Kissing My Penis’ video until next Thursday. If you like this apology and you believe it, please check out my other apology videos.”