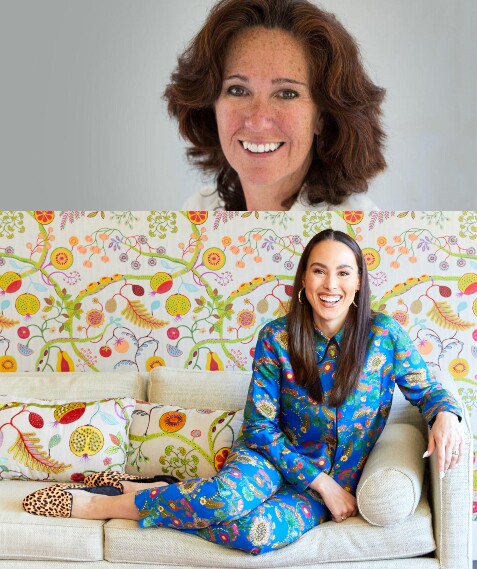 Meena Harris knows she had an unusual upbringing. She was raised in a family of all women: her grandmother, her mother and her aunt Kamala (a.k.a. the vice president).

“We’re taught to hide our ambition, to diminish it,” Harris said Sunday at the Los Angeles Times Festival of Books. She was joined by Times culture columnist and critic Mary McNamara for a panel discussion of her children’s book, “Ambitious Girl.” Harris is a lawyer, author and social media influencer; in 2017 she started a company that sells socially conscious clothing, which has often been worn by celebrities.

A mother of two daughters, ages 3 and 4, Harris wrote the book to teach children like them the value of “respecting and admiring women.”

Published in January and illustrated by Marissa Valdez, “Ambitious Girl” is about a young Black girl discovering the challenges faced by women as they confront labels like “too loud” or “too assertive” — words meant to knock them down.

“It’s really about reclaiming these words. Reframing them, redefining them, establishing them as the positive qualities and positive attributes in girls and women,” Harris said. “I wrote this just as much for myself as I did for my daughters. We all can relate in some way to a variety of words that we know are used in different ways with women and the power that it has in culture and society.”

Harris said she intends to follow up “Ambitious Girl” with an ABC book, starting with “ambitious” for A and moving through “bossy,” “competitive,” “direct” and beyond, reframing them one by one.

Diversity and representation have also been at the forefront of the author’s mind.

When Harris first became a parent, she recalled reading classic children’s books like “Brown Bear, Brown Bear, What Do You See?,” “Goodnight Moon” and “Where the Wild Things Are” to her daughter.

But at a certain point, she started wondering: “Where are the Black girl characters who are the main protagonist? Where are the women?!”

So she became “the annoying mom who stops every other page and says: ‘Did you notice there are no women in this book, or that they don’t speak, or that we don’t know their names? That’s kind of weird, right?”

Harris has seen firsthand the power of representation. In the past two years, her eldest daughter has expressed a wish to be a president and an astronaut when she grows up.

Why? Because she’s seen women running for president and has a children’s book about Mae C. Jemison, the first Black woman to travel into space. “She’s someone she can see herself in and imagine that possibility for herself,” Harris said.

Though Harris acknowledged the publishing industry’s progress in offering more opportunities to writers and illustrators of color, she said it still has a long way to go.

Books with protagonists of color don’t just benefit marginalized communities, Harris added. “We know that diversity and exposure to other cultures — to see experiences outside of your own bubble — is good for all of us.”

Like the vice president, who used her nomination acceptance speech to honor the Black women who paved the path for her, Harris expressed both her gratitude to others and her readiness for what lies ahead.

“I’m proud to be part of this generation of authors of color that I think are really committed to diversifying children’s content,” the author said. “And there are so many incredible people who have come before me and made it possible for me to do what I’m doing. But we have a long way to go.”

So what should girls do if they are told they’re “too this” or “too that”?

“Reclaim that,” Harris advised. “Say ‘Thanks! I am loud because I’m proud. I am ambitious because I have big dreams.’ Don’t let anyone else define you or tell you who you are. You tell them, and you take those words and you turn them into a positive, which is what they are. You do you.”