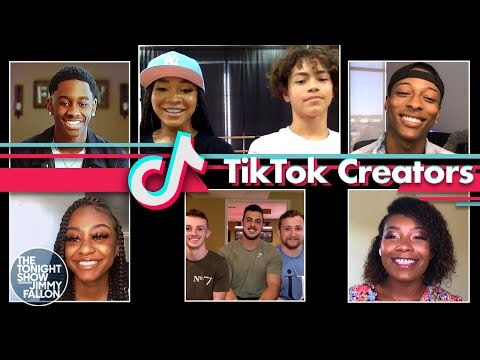 A week after his now-infamous TikTok dance medley with Addison Rae backfired, Jimmy Fallon invited the dances’ choreographers to perform their viral moves on “The Tonight Show.”

Fallon and Rae, who are both white, came under fire last week for demonstrating the dances on the show without crediting the originators, many of whom are Black. The controversy reignited conversations about white celebrities who profit from the creativity of Black artists who don’t get the same opportunities.

“On our last show before break, we did a bit with Addison Rae where she taught me eight viral TikTok dances, and we recognize that the creators of those dances deserve to have their own spotlight,” Fallon said Monday.

“So right now, some of the creators will join me to talk about how their dance went viral and then perform the dance themselves.”

First up were Johnson (@theemyanicole) and Cotter (@cchrvs), who choreographed the dance to Cardi B’s “Up.” A side-by-side video of the pair performing the dynamic dance alongside Rae blew up on Twitter last week, as many believed Rae executed the choreography poorly in comparison on “The Tonight Show.”

“We already knew that Cardi B had just came out with a new song called ‘Up,’ and it was going viral — everyone was listening to the song,” Cotter said of their creative process. “So we knew that if we were to make a challenge to it, it had the potential of going viral.”

Cardi B “posted our video two times on her Instagram and then one time on TikTok,” Johnson added. “So yeah, that was a good experience.”

Up next was Scott (@yvnggprince), who created the dance to Pop Hunna’s “Adderall (Corvette Corvette)” and is currently a freshman studying visual communications at the University of Delaware. In addition to being a full-time student, Scott is also a model, dancer and actor who hopes to portray the live-action version of Marvel’s Miles Morales, a.k.a. Spider-Man.

“I want to be an all-around performer and entertainer,” Scott told Fallon. “Will Smith and Kevin Hart — they’re my inspirations. I love their journey. One of my dream roles would be to play … Spider-Man. I told you I was a gymnast, so you know I got the moves and stuff, and I think I look kinda good in the tights.”

Then came Powell (@flyboyfu), who created the TikTok remix to D4L’s “Laffy Taffy,” and Franklin (@17slumz), who choreographed the dance. The former recorded the “Laffy Taffy” rap, freestyle, in a single take, while the latter came up with the choreography in about five minutes on the school bus.

“I made the dance when I was 15 just because,” Franklin said. “And then, two years later … it’s on TikTok. It’s viral. … It shocked me because I wasn’t even expecting it to go viral.”

Powell and Franklin were followed by Snyder, Nale and Dahl, who teamed up for a dance to the Weeknd’s “Blinding Lights.” They operate a joint TikTok account (@macdaddyz) while rooming together at Immaculata University in Pennsylvania.

“I’ve actually been a huge fan of the Weeknd for a while, and when that song first came out, I was listening to it all the time, playing it at school,” one of the roommates said. “And one night we were dancing to it, and it just kind of went together perfectly.”

Last but certainly not least was Wilson (@keke.janjah), the mastermind behind the dance to Megan Thee Stallion’s “Savage,” which has been re-created by multiple high-profile stars, including Megan Thee Stallion herself. Wilson, who has been dancing for 10 years, said she choreographed the hit challenge in about 30 minutes.

“At that time, I just had graduated high school, and I didn’t know what I wanted to do with my life,” Wilson told Fallon. “I needed an outlet to de-stress, so I downloaded TikTok. … I’d seen that people were doing a bunch of dances on TikTok, so I wanted to try it too.”

After Monday’s “Tonight Show” episode aired, Rae shared the segment on social media, expressed a desire to collaborate with the choreographers and encouraged her millions of followers to “show them love.” Last week, Rae responded to the criticism when approached by TMZ and praised the creators for their work.

“It’s kind of hard to [give] credit during the show, but they all know that I love them so much, and I support all of them so much,” Rae told TMZ. “And hopefully, one day, we can all meet up and dance together. … They’re all so talented, and I definitely don’t do them justice. They’re amazing.”