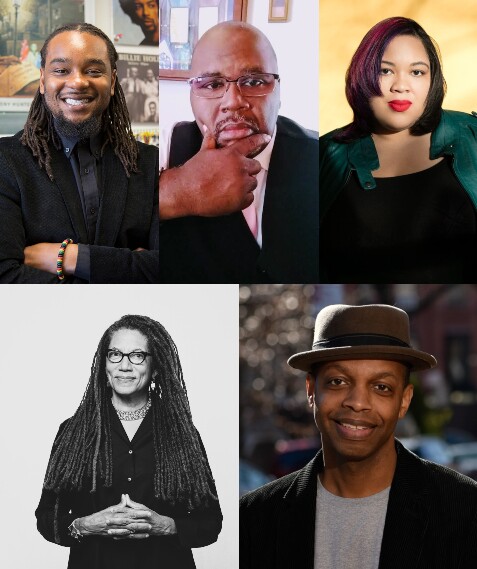 “It’s my North Star. I am never lost, I am never away from it,” she said. “All I have to do is lift my eyes and see where I am, where my people have always been, where my grandmother stood, what my great-grand-people had to do in order to live and survive. Blackness is alive and well and protected and nurtured in hopefully everything that I touch with a pencil.”

The National Book Award-winning poet was speaking Sunday at the Los Angeles Times Festival of Books, joined by moderator Marcus Anthony Hunter and authors S.A. Cosby, Danielle Evans and Robert Jones Jr. for a virtual roundtable about the Black experience across book genres. Finney’s latest collection, “Love Child’s Hotbed of Occasional Poetry,” was a finalist for the 2020 Times Book Prize in poetry.

Blackness and love — queer and straight — were recurring topics in a spirited conversation that included the influence of the R&B singer Phyllis Hyman and the inseparability of joy and pain.

For Jones, Black queerness in particular is an act of radical love.

Jones called this idea the driving force behind his debut novel “The Prophets,” a story about the forbidden love between two enslaved young men on a plantation in the Deep South. He had been searching through the literary canon for antebellum stories about queer Black people, but mostly found fleeting references or scenes of sexual assault.

They were “never in the context of love,” he said. “I felt it was my duty to bear witness because there had to be that kind of person, that kind of experience, that kind of love that existed — although erased from the narrative. And so I wanted to re-inscribe it.”

Evans said she is drawn to the lonelier and more confusing experiences of Black love.

“I am interested in the difference between agency and loneliness because I don’t think we always know,” said Evans, author of “The Office of Historical Corrections,” a finalist for the Times Book Prize in fiction.

The stories in her collection feature Black and multiracial characters experiencing the chaos and wonderment of love, lust and grief, along with the push and pull of inescapable history.

“I’m especially interested in [agency and loneliness] for Black women,” Evans said, “because I think so much of what’s expected of Black women in partnership is a kind of endless caretaking. And so setting a boundary can be a kind of self-love.”

Cosby said that, in writing “Blacktop Wasteland” — a noir thriller about a Virginia man seeking escape from his past that won the Times Book Prize for mystery/thriller — he wanted to portray Black love in a way that wasn’t “trauma-borne” or “the usual Sturm und Drang.”

“When people come to Black fiction, they have certain expectations that have been given to them by society — that it has to be this biblical torture, this over-the-top suffering,” he said. He wanted to defy those expectations by depicting the relationship between his protagonist, Beauregard “Bug” Montage, and his wife, Kia, as a “joyful and happy and connected” couple.

“I wanted to have this love story in the middle of this heist novel,” Cosby said. “I didn’t want Beauregard to be a player… or a kid who didn’t appreciate his Black woman. I wanted them to be a unit.”

But Cosby doesn’t dismiss the value of suffering, in his fiction or in life.

“Pain also makes us who we are,” he said. “If you persevere through that pain, you come out the other side with joy. Beauregard is a character that changes from the beginning of the book to the end,” who teaches us that “once you take ownership of your pain, then you can experience the joy that’s been waiting for you all of the time.”