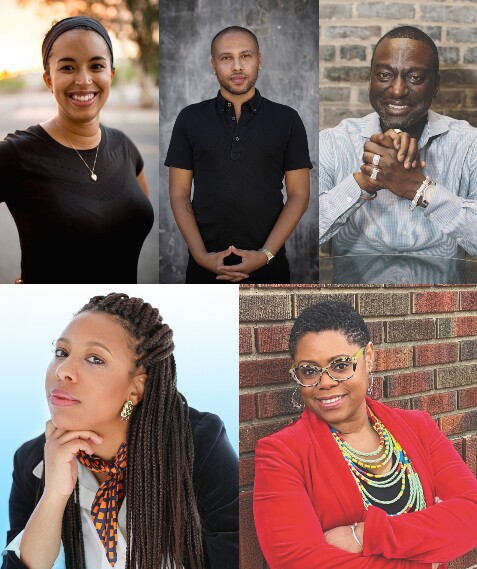 “We tell teens the same stories, over and over, and those stories don’t happen to everyone,” Parker said Saturday at the Los Angeles Times Festival of Books. She was joined by moderator Hannah Gómez and authors Dean Atta, Yusef Salaam and Ibi Zoboi in a virtual roundtable discussion on exploring the Black experience in their young-adult fiction.

Their stories, ranging from small-town schools to wrongful incarceration and dressing up in drag, feature three very different protagonists, each on journey toward love, acceptance and liberation. But the going is rarely easy, a reality all four authors sought to convey in their work.

“There is value when you get knocked down,” Salaam said of his book “Punching the Air,” which he co-wrote with Zoboi. According to him, adversity can breed resilience.

The insight was especially poignant in light of Salaam’s backstory. Like the protagonist of his book, he was wrongfully convicted and imprisoned as a teenager. Zoboi said the novel was inspired by her co-author, who was one of the five boys convicted in the 1989 Central Park jogger case and exonerated in the early aughts.

“The character, Amal, is a 2021 version of 1989 Yusef,” she said, remembering the wisdom Salaam exuded even as a young adult. “Yusef was an incredibly woke teen.”

When asked about his incarceration near the end of the panel, Salaam remarked that if he were given the opportunity to go back to the past, he wouldn’t change a thing. In the end, he said, the case was an incredible demonstration of how the truth could not be buried.

The protagonist of Parker’s book “Who Put This Song On?” comes to a similar realization. Morgan is one of the few Black students at her conservative, small-town school. Her struggle to fit in is made even more difficult by a recent diagnosis of anxiety and depression.

At first Morgan tries to hide her mental health issues, but slowly she learns how powerful self-acceptance can be — a path Parker sought to make as realistic as possible.

“The emotions are true, everything else is fake,” she said, addressing the fact that she and her main character share a name. It’s a subtle nod to readers that the author had been there before and, most importantly, made it through to the other side.

Atta chose a different ending for his debut novel, “The Black Flamingo.” Michael, a biracial teenage boy growing up in London, comes out in high school and becomes a drag performer at his university.

The author intentionally wrote a story that could be considered a fairy tale after noting the dearth of happy endings in LGBTQ literature. “I just wanted to contribute something really hopeful to the world,” Atta said of his ultimately triumphant coming-out novel.

All four authors reflected on how writing their characters gave them a chance to reinvent their teenage experience.

“There are so many things in ‘The Black Flamingo’ that I didn’t do in my teens, that I would have loved to,” Atta said, before talking about the joy of being able to give his protagonist the support, role models and resources he wished he’d had.

Atta wants the attainability of hope to be one of the takeaways from his novel. Finding yourself, he said, is like trying on different outfits before buying one that fits — the one that works without changing you at the core.

Parker simply wants her books’ readers to “hang in there,” and to know that there’s no stigma around therapy or medication — whatever it takes to get to the other side.

Zoboi emphasized the power of art, in collaboration with the person receiving it. Readers’ “ability to create something out of nothing is their greatest superpower in this world,” she said.

Salaam echoed her sentiment, hoping their book helps kids find “value in the valley wherever you are, and make something out of it.”