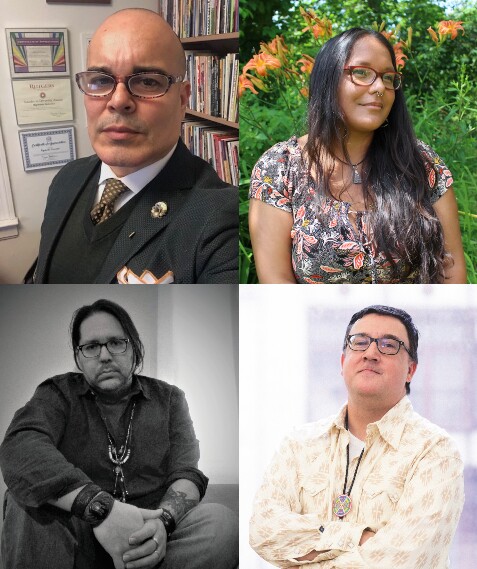 Leslie Marmon Silko’s “Ceremony” was written through a bout of homesickness.

That fact was particularly important to author Danielle Geller, who recently reread the novel after moving to the Pacific Northwest. In her introduction to the book, Silko wrote from Alaska about how much she missed the desert. Living through the gray winters of Victoria, Canada, and after earning her writing MFA in Arizona, Geller could relate.

Geller joined authors Brandon Hobson and David Heska Wanbli Weiden in a Los Angeles Times Festival of Books discussion in honor of Silko, moderated by poet and Times contributor Rigoberto González. The trio paid homage to Silko, who was awarded the 2020 Robert Kirsch Award for lifetime achievement in writing about the American West.

Geller spoke of how Silko’s descriptions of the desert soothed her own homesickness before marveling at the nonlinear structure of “Ceremony.” “She’s showing how trauma really warps time,” Geller said, “…how the arbitrary distinction between past and present disappears.”

The effect resonated with Geller’s experience of her childhood. Her memoir “Dog Flowers” surfaces memories of Geller’s family’s troubled history, documenting the ways she’s come to understand her mother, from whom she was separated at 5.

“I began to feel a lot more empathy and sympathy for her,” Geller said of her mother, after learning more about her life through the things she left behind. Access to her mother’s ephemera — like diary entries of people she dated or what she had for dinner — helped Geller see the parallels between their lives.

“Dog Flowers,” like Hobson’s novel “The Removed” and Weiden’s noir thriller “Winter Counts,” depicts people struggling with addiction. Each author spoke about the importance of avoiding stereotypes about Native Americans and substance abuse.

“I wanted to create an honest portrayal of what goes on in my reservation,” said Weiden, an enrolled citizen of the Sicangu Lakota Nation. He wanted to acknowledge the problems plaguing his community and others — to depict them realistically — while making it clear, as Geller emphasized, that studies show no greater susceptibility to alcohol abuse among Indigenous communities than in any other groups around the world.

Woven into the authors’ discussion was a recognition of the generational trauma Native American communities contend with even today. Weiden’s grandmother was taken to the Carlisle Indian Industrial School, where she wasn’t allowed to speak her language or practice her spirituality. Virgil, the protagonist in Weiden’s novel, wonders what it’s like to live free of the burden of “the murdered children, the stolen land, that every Native person carries around.”

Hobson took these heavy themes in his own dark direction — into an underworld mentioned in many traditional Cherokee stories. “I wanted to take Edgar to the Darkening Land, and see that that place was not much different than where he already was,” Hobson said of his troubled hero.

“The Removed” also draws attention to the land and the trauma that it, too, bears. Plays on gravity throughout the book — like an image of the rain lifting into the sky — evoke an Earth burdened by historical memory.

Hobson, Geller and Weiden all remarked upon the seeming renaissance of Indigenous writers in today’s literary landscape. Geller observed a heartening level of solidarity among Native authors — offering one another everything from advice to back-cover blurbs — while Weiden acknowledged the contributions of the Institute of American Indian Arts, in which all three authors have been involved. The institute’s emphasis on mentorship and dedication to craft helped usher in a generation of Indigenous writers — interconnected and mutually supportive.

“There’s this culture, now, that we want to help each other out,” said Weiden. “Natives have always been about community, and I think we’re finally manifesting that.”