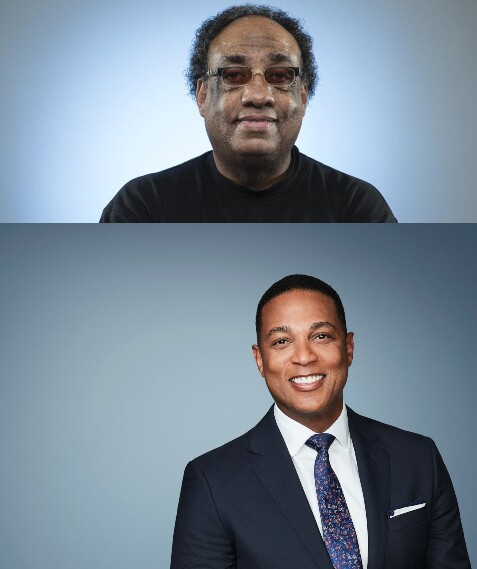 Don Lemon wasn’t sure readers would have the appetite for the heavy subject matter of his book “This Is the Fire,” published the year after George Floyd’s death. For better and worse, the months that followed reassured him on that front.

“Almost every single thing I write about in the book is playing out right now in real time,” the CNN anchor said during a conversation with Los Angeles Times writer Greg Braxton for the Festival of Books on Tuesday.

It was a prescient remark. When news broke in the early afternoon that a verdict had been reached in the trial of Derek Chauvin, Lemon had to cut the panel short so he could report the news for CNN. Chauvin was found guilty of murder for the death of George Floyd.

“I’m a little bit anxious, a little bit concerned about the future of America,” Lemon said of his feelings before the verdict was announced. He added that he was hopeful — not optimistic — that whatever followed will move the country forward for the better.

Lemon, the only Black prime-time anchor in the U.S., has gained a lot of attention in recent years for comments he made as host on “CNN Tonight” that brought attention to racial injustice — from calling President Trump a racist in 2018 to mourning George Floyd on air by running a clock for 9 minutes and 29 seconds, the length of time Chauvin had kept his knee on Floyd’s neck.

The anchor sees his comments as part of the work he’s been tasked to do. “First and foremost, it’s my job,” he said.

“But also, in this moment, I think that I’m uniquely qualified to do what I’m doing because of my lived experiences as a Black man in America. … I think I’m just there to be honest with the viewer, to give the information as it is factually. And if there’s any analysis to be done, I think I am free — and should — give that analysis with my perspective and from my point of view.”

Lemon reveals more in his book, subtitled “What I Say to My Friends About Racism.” His writing arose, in part, out of conversations with white friends who kept asking the author, amid the protests last year, what they should do about racism. Lemon said these talks have reignited in light of the verdict, although this time, he can just tell them to read his book.

Such conversations have become easier to have since the book came out, Lemon said, because it contained tools that can be used to talk about racism.

“I offer them grace. I don’t let them off the hook either,” he said of his chats. “They have to be held accountable for their own actions, and they have to, at the end of the day, do the work themselves.”

Lemon’s book also recounts some difficult experiences in his life, from the death of his sister to his trip to Africa to see the birthplace of some of his ancestors who were sold into slavery. Conveying these deeply personal anecdotes was challenging for Lemon, especially as a person of color.

After Trump’s “both sides” comments about Charlottesville, Va., and the deaths of Ahmaud Arbery, Breonna Taylor and Floyd, Lemon felt compelled to contribute something beyond his two-hour nightly assignment as CNN anchor —”something more lasting than a breaking news report that would go away the moment it happened.”

“This Is the Fire” borrows its title from James Baldwin’s “The Fire Next Time,” which Lemon named as the book that had the greatest impact on him — in part because of Baldwin’s shared experience as a gay Black man.

Both books begin with a letter. Baldwin dedicated his to his nephew, James; Lemon to his nephew, Trushaad. Baldwin wrote 100 years after the Emancipation Proclamation; Lemon wrote months after a recorded police killing had rocked the country in the middle of a pandemic.

The recipient of that letter has yet to see it. “Well, he’s 13,” Lemon laughed. “I haven’t really had the opportunity to sit down with him and really talk about it. I can tell you that his mother and his stepdads are both just over the moon and were so moved by the entire book, but especially that. It’s something that he’ll have for the rest of his life.”