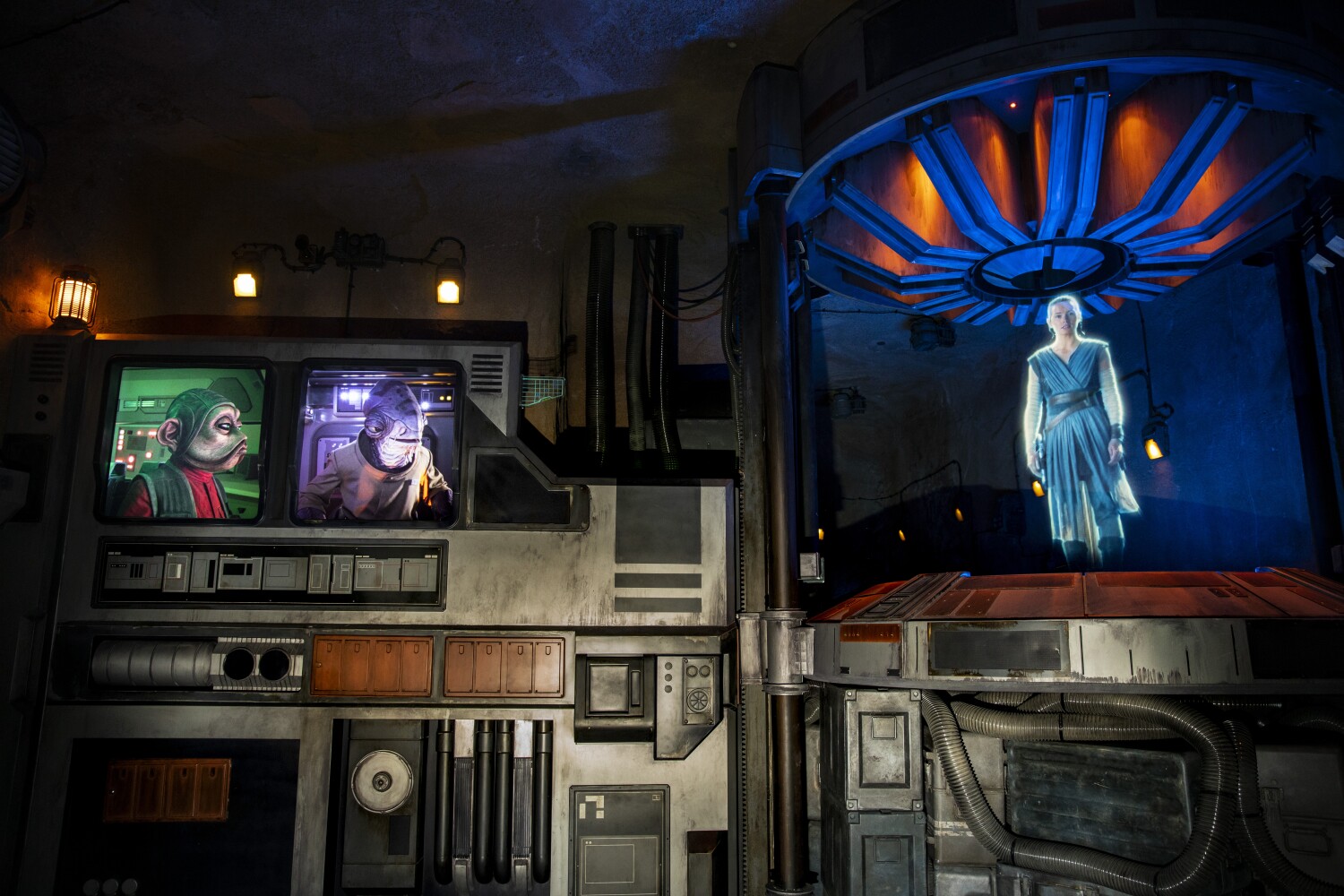 The Disneyland ride Star Wars: Rise of the Resistance is an 18-minute space adventure in which riders join the resistance movement, get captured by the evil First Order and finally escape with the help of members of the rebellion.

But even in a galaxy far, far away, Earth’s deadly pandemic has had an impact: California health protocols mandate that all indoor rides last no longer than 15 minutes. To offer Rise of the Resistance, Disneyland has to shorten it.

1:39 PM, Apr. 28, 2021An earlier version of this story said the Universal Studios Hollywood attractions Despicable Me: Minion Mayhem and The Simpsons Ride were closed due to state health protocols. The attractions were recently altered and reopened.

Disneyland officials promise that when the park reopens Friday, the ride’s major plot points will remain intact, including lots of explosions, drama and high-tech mayhem.

Disneyland representatives said the overall experience would be shortened by cutting down the “dwelling points,” where riders wait or stroll through the attraction. That could include the segments when visitors are waiting to be interrogated by the First Order’s leader Kylo Ren or when they are allowed to linger before a unit of stormtroopers in a Star Destroyer’s hangar bay, according to Disneyland representatives.

A speech given at the beginning of the ride by a hologram of resistance hero Rey may also be shortened, they said.

To help reduce crowding in the park, Disneyland has also expanded its virtual queueing system for the ride, allowing park visitors to join the queue through the Disneyland app twice daily — at 7 a.m. and at noon — instead of once. In the morning session, visitors can join the queue without having to be in the park. To join the queue at noon, parkgoers must be inside either Disneyland or Disney California Adventure Park. The ride is Disneyland’s newest attraction, added only two months before the pandemic closed the park last year.

These changes are among several ways the state’s health protocols are altering how theme park fans experience their favorite attractions.

The state guidelines that allowed theme parks to reopen this month include rules that are designed to reduce the time parkgoers spend doing things in close proximity to strangers, such as standing in queues or inside poorly ventilated areas. For that reason, the rules limit the parks’ overall capacity and require that all queues be outdoors and that indoor rides last no longer than 15 minutes. (As the rules state, “indoor settings pose a much higher risk of transmission than outdoor settings.”)

Over the last couple of decades, major theme parks such as Disneyland and Universal Studios Hollywood had leaned the opposite way, investing heavily to make rides’ long lines more tolerable by moving them indoors. That protects visitors from the weather and creates an opportunity to fill the space with entertainment — video screens and talking animated characters — to enhance the overall theme or plot of the ride.

The parks “spent millions of dollars and thousands of hours designing all the stuff in those queues,” said Martin Lewison, a business administration professor and theme park expert from Farmingdale State College in New York.

Now, where possible, the parks are shortening or eliminating the indoor queues instead of shortening the rides.

Six Flags Magic Mountain in Valencia opened April 1 with most roller coasters operating as normal. But people waiting to board the Superman: Escape From Krypton ride no longer shuffle into a structure that resembles Superman’s Fortress of Solitude.

At Universal Studios Hollywood, which also reopened this month, one of the most popular rides — Harry Potter and the Forbidden Journey — takes place primarily inside what resembles the enchanted Hogwarts castle. During the indoor queue, parkgoers stroll past statues of wizards and listen to dialogue coming from moving paintings, animated creatures and 3-D projections of Harry Potter and his friends.

To keep the parkgoers moving and reduce the time spent inside, Universal Studios is now sending visitors into the queue in what Senior Vice President of Operations Scott Strobl described as “pulses” of 15 to 20 people at a time, with short breaks in between. The idea, he said, is to keep visitors from stopping to form a bottleneck.

Rides without indoor queues have been affected as well.

The WaterWorld stunt show at Universal Studios has been shut down — but not because of concerns about members of the audience, who sat outdoors. It’s because the stuntmen and stuntwomen can’t wear masks and maintain physical distance while punching, kicking, hugging and trying to kill one another in the show.

A few indoor attractions, such as Despicable Me: Minion Mayhem and the Simpsons Ride, were temporarily closed because their theater-like seating doesn’t lend itself to physical distancing. The pre-show elements of the attractions have been shortened and the rides were recently reopened.

Most theme park fans are not likely to protest changes, said Lewison, noting that park enthusiasts have been shut out of their favorite pastime for more than a year.

“I think everybody is willing to make some tradeoffs to get into a theme park right now,” he said.

Hastin Zylstra, a theme park fan from Santa Ana, said he would be upset if the coronavirus rules eliminate important elements of the Star Wars ride.

But there is a way to satisfy him.

“If it’s a case of just improving operations so there’s less standing around, that’s a win in my book, and a preferable way to do it,” he said.