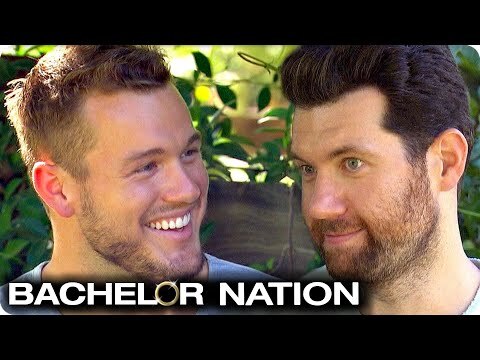 Years before Colton Underwood came out as gay, comedian Billy Eichner told the reality TV star that he could be “the first gay Bachelor.”

While guest starring on Underwood’s season of the ABC dating program “The Bachelor” in 2019, the “Billy on the Street” star offered the leading man some life advice that has taken on new meaning since Underwood announced he was gay Wednesday on “Good Morning America.”

“I’m gay. I know that’s a shock, Colton,” Eichner joked during his “Bachelor” appearance as Underwood laughed throughout the exchange. “That, I think, you should look into. Maybe you’re the first gay Bachelor and we don’t even know.”

The conversation, which has recently gone viral on social media, prompted a response Wednesday from Eichner, who congratulated Underwood on embracing his full identity.

Eichner was among multiple Hollywood figures — including “Watch What Happens Live” host Andy Cohen and “Schitt’s Creek” star Dan Levy — who applauded Underwood for his courage. In classic Eichner form, the actor followed his initial reaction with a snarky joke about the GLAAD Media Awards, which celebrate LGBTQ representation in film, TV and beyond.

“Here’s how Hollywood works: Colton’s gonna get a GLAAD Award before I do,” Eichner wrote.

As the old footage of Underwood and Eichner made the rounds on social media, several people cautioned against perpetuating the harmful notion that one can predict someone’s sexuality. “We can’t keep doing this to those we see struggling with their own journey,” one person tweeted.

This is actually extremely cringe worthy. I have enormous respect for @billyeichner, but we can’t keep doing this to those we see struggling with their own journey. It’s just *not* how we be allies to anyone.

Eichner later expanded his thoughts in a brief thread reminding folks to respect people’s different coming-out journeys. He also paid tribute to past trailblazers who went public with their sexuality when LGBTQ people were not as accepted in Hollywood.

“Two things,” Eichner tweeted. “Number one, pop culture now sometimes makes it seem like every 14 year old gay boy is flying out of the closet without a care in the world. Some are. And that’s INCREDIBLE. But many are not. So let’s remember that.

“AND let’s ALSO honor and praise those in entertainment who came out years — DECADES — before it was embraced and could be used to professional advantage. I don’t mean me — I mean many others, especially those before me — that took real guts. Let’s put some shine on them too.”

AND let’s ALSO honor and praise those in entertainment who came out years – DECADES – before it was embraced and could be used to professional advantage. I don’t mean me – I mean many others, especially those before me – that took real guts. Let’s put some shine on them too. ❤️

In a candid interview with Robin Roberts on “Good Morning America,” Underwood declared that he is “proud to be gay” after growing up in Catholic and athletic circles that caused him to be ashamed of his sexuality.

The former football player also reflected on his “Bachelor” past, telling Roberts that he thanked God for “making me straight” upon starring in the series’ 23rd season and hoped the show would lead him to marry a woman and have children.

“I’ve thought a lot about this too, of, ‘Do I regret being the Bachelor and do I regret handling it the way that I did?’ I do,” he said before thanking and apologizing to the women he met on the show. “I do think I could’ve handled it better, I’ll say that.”

During his time on the competition program, Underwood was known as “the virgin Bachelor” and made headlines when he jumped the fence surrounding the “Bachelor” mansion in an apparent attempt to escape the production. Throughout Season 23, Underwood’s virginity came up repeatedly, including during his sit-down with Eichner, who took on the role of “camp counselor.”

When asked by Eichner during the episode if he planned on waiting until marriage to have sex, Underwood said he was waiting for true love.

“Fine, you get an award,” Eichner quipped. “But let’s say, then you have sex, and the sex is bad.”

“There’s always room for improvement,” said Underwood, to which Eichner replied, “Not a lot.”

Underwood told Roberts that he chose to remain a virgin as a way to process his sexuality. After hating himself “for a long time,” Underwood said he “came to terms with” his sexual identity earlier this year.

“If I had to go back and give anybody advice … ‘You’re going to get through it’ is what I would tell myself,” he told Roberts. “‘Keep fighting for you. Keep choosing you every morning. And when the time’s ready or when the time’s right and you’re ready, do it on your own time.’”