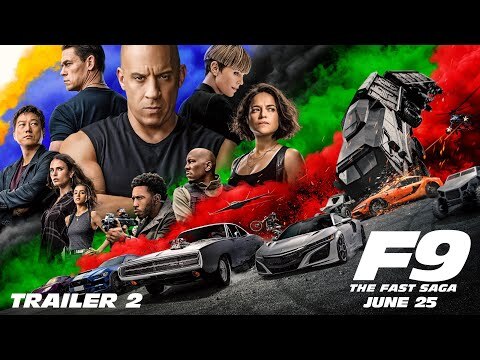 Once upon a time, “Fast & Furious” hero Dominic Toretto was just the humble, brooding ringleader of a squad of street racers boosting electronics off of big rigs along the highways outside of Los Angeles. What a difference 20 years, 10 films, $5 billion in global franchise earnings and a whole lotta NOS make.

Nine movies (and a spinoff) deep into Universal’s record-breaking “Fast” Saga, Toretto has become den daddy to a sprawling chosen clan of world-saving street racers-turned-international spies whose action antics exponentially defy not only death, but the laws of physics with each new installment.

Now, with series director Justin Lin (“The Fast & The Furious: Tokyo Drift,” “Fast & Furious,” “Fast 5,” “Fast 6″) returning to lead the crowd-pleasing franchise into its final chapters, “Fast 9″ (June 25) is gearing up to be one big family reunion setting up a 10th and 11th series conclusion.

After postponing its theatrical debut for more than a year due to the pandemic, “Fast 9″ is finally charging toward release — again — with a new trailer packed with tidbits and teases as the gang races into terrain where no “Fast” family has gone before.

John Cena as Dom’s “little” brother. We’d already learned last year that Vin Diesel’s Dom had a surprise bad guy brother named Jakob Toretto, and that he looked like WWE star John Cena. Jakob’s existence has been retconned into “Fast 9″ by a script credited to Lin and writer Daniel Casey — but who really started the brotherly beef? “You always say never turn your back on family,” Cena growls in the trailer, “but you turned your back on me.”

Brian O’Conner lives on. After watching the late Paul Walker drive off into the sunset at the end of “Furious 7,” filmmakers have been deliberate about how much of the beloved actor and his “Fast” character, Brian, to include in future films. Here the character is glimpsed briefly in footage being watched by Dom, who has named his own young son after his best friend.

“Fast & Furious & Self Aware?” Part of the family since jumping a speeding car onto a boat in “2 Fast 2 Furious,” Tyrese Gibson’s Roman Pearce has now seen the crew get in and out of ever more ridiculous shenanigans … and is the first to comment on how over the top their adventures have become. “We’ve taken out planes, trains, tanks … I’m not even going to think about the submarine. And now we’ve got cars flying in the air?”

The Cipher of it all. A fan theory prompted by the end of the Dwayne Johnson and Jason Statham-starring “Hobbs & Shaw” posited that Charlize Theron’s villainous “Fate of the Furious” hacker Cipher might be the link tying the spinoff’s sci-fi cyborgian lore with the main series mythology. What we do know: A criminal mastermind who can pull off a chic bowl cut and menace from inside a plastic prison is a foe to be feared.

Justice is coming. After clamoring for #JusticeForHan for years, fans of Kang’s world-wise hero are getting their deepest wish: To see the “Fast” franchise finally do right by Han, who perished at the end of “Tokyo Drift” but was so popular filmmakers bent time to include him in the sequels anyway. The franchise later misstepped by inviting his killer, Deckard Shaw, to the family BBQ — but “Fast 9″ promises to reveal how exactly Han is still alive.

Per the new peek, “Fast 9″ will serve up Helen Mirren drift racing around London, MRod teaming up with Jordana Brewster’s Mia, Nathalie Emmanuel’s Ramsey getting behind the wheel and Anna Sawai (“Ninja Assassin”) in a mysterious role.

Magnets mean … sci-fi? The power of mega magnets used by Dom & Co. to barrel their way through crowded streets propels some of the messiest, metal-crunching chase sequences in the packed 3.5-minute trailer.

Sci-fi leads us to: SPACE. Finally! It was only a matter of time before the long-debated fan theory made it onto the screen and into “Fast” lore. After crossing the globe zooming on land, water (well, ice) and through the air, where else could they have gone next but up?