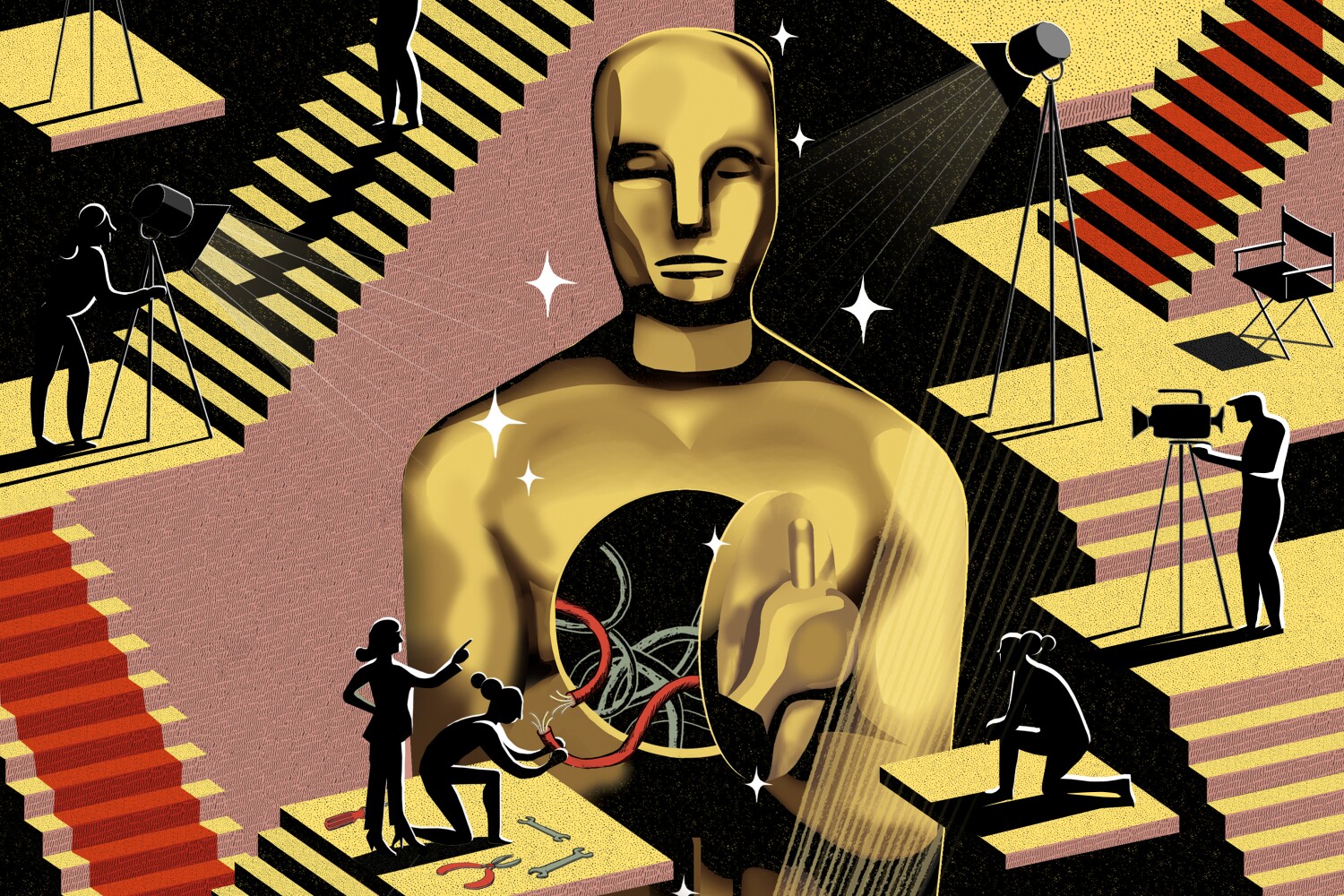 In any year, producing the Oscars telecast can be a thankless job. No matter how you trick it out, the show is three-plus hours of live television, essentially an endless succession of people reading lists and making acceptance speeches. Start playing off winners mid-speech to stay on schedule and people complain; let winners talk and people complain even more when the show runs long.

Over the years, some shows have been better, some worse, but I applaud all who have agreed to take it on.

Last year, the biggest question the Oscars faced was whether or not “Parasite” would become the first non-English-language film to win best picture (it did, along with three other awards.)

This year there are so many questions it’s hard to know where to begin. Let’s start with: Who’s going to watch a show honoring a bunch of movies most people have not seen because movie theaters were closed for pretty much an entire year?

Is “The Queen’s Gambit” or “Money Heist” nominated? Will “Tiger King” be receiving a special award? Because while some in Hollywood wasted precious early-pandemic months debating whether releasing films on streaming services or VOD when all the theaters were closed would somehow end cinema forever, that’s what we were watching.

There is a chance more people than expected will tune in to mourn Chadwick Boseman (nominated for “Ma Rainey’s Black Bottom”) or to see what an Oscars ceremony held in Union Station will look like. But there is an equal if not greater chance that, with COVID-19 restrictions beginning to ease, many will decide that the last thing they want to do is spend three more hours in front of a home screen.

Bringing in Soderbergh is a bold move, guaranteed to increase the curiosity quotient. Will the entire show be shot on a hand-held camera? Will it reunite (please God) Dianne Wiest, Meryl Streep and Candice Bergen? (If Soderbergh could shoot “Let Them All Talk” in two weeks, he really might be able to bring it in at three hours.)

I am a bit concerned about the lack of a host this year. The absence of some previously beloved comedian forced to make interstitial Brad Pitt jokes definitely streamlined the last two telecasts. But after the year that we’ve had, viewers may need more hand-holding than usual. The mere presence of the Oscars definitely hints at a return to normalcy, but it would be nice to have a trusted figure tell us that things are going to be OK.

Maybe they could even get their second Pfizer shot live, to reassure the vaccine-anxious who may be watching. (Soderbergh could get one of those really big needles from “The Knick.”)

I am certainly anxious about Soderbergh’s claim that this year’s ceremony is going to feel “like a movie.”

I want to know more. Will it be a good movie? A potentially Oscar-nominated movie? Because with a best picture list like this year’s the competition is pretty intense.

Or will it be some sort of “found footage” situation that quickly drags, causing viewers to wonder if a better way to honor film on Sunday night might be to actually support those local theaters now open by seeing an actual movie? Would it be a good thing or a bad thing if the Oscars ratings were low because people decided to go to the movies instead? (Talk among yourselves.)

Obviously, this year’s Oscars “movie” will have a star-studded cast. But will they be, say, struggling to make their way from the top decks of that ocean liner, now capsized, to cut through the steel bottom in hopes of rescue? Because I’m telling you right now, not even Meryl Streep can match the pathos Ms. Shelley Winters conjured in her “Poseidon Adventure” death scene.

I would totally be down for it being a heist movie. Sandra Bullock, Cate Blanchett, Rhianna and the rest of “Ocean’s 8” swiping enough ice to make the folks at Harry Winston wish they had not lent out all those Oscar night diamonds. Especially if the caper could somehow involve Melissa McCarthy as the undercover agent from “Spy.” But I feel the liability issues involved would daunt even Soderbergh.

Maybe his opus will be a comedy — God knows that, as with most years, the best picture nominee list could use a little comic relief. We do know it won’t be a musical. Performances by the musical nominees have been offloaded to a 90-minute preshow called “Into the Spotlight,” which I guess is supposed to make up for the absence of screaming fans on Hollywood Boulevard.

It will be interesting to see how the red carpet is going to work at Union Station. If Jimmy Fallon were hosting, he would definitely be running down it to leap onto a train as the doors closed right on the face of his pursuer, possibly Bryan Cranston. You can say that for the odd location: Films that begin with a train scene are usually pretty good.

Unfortunately, and I cannot be the first to notice this, the Oscar telecast is not a film. It is a television show with a lot of repetitive but essential ingredients. Lists must be read, clips must be shown, people must give speeches, and no matter how much the producers beg, these speeches will veer wildly between the genuinely moving, the pointedly political and the ever-exasperating “and I’d like to thank every member on my team” ridiculousness.

Soderbergh has a lot of experience with television, so I’m not sure why he has chosen to insist that his Oscars will be a movie, especially when television has so many Oscar-friendly templates to choose from (and I’m not even counting the Emmys, the Grammys or, heaven forbid, the Golden Globes).

For one thing, a 3½-hour movie sounds very much like a season of “Fleabag,” and who doesn’t want another season of “Fleabag?” If Phoebe Waller-Bridge is not willing to help, then surely a reality show, with its spiky structure of conflict, truce, more conflict, direct-to-camera speech makes more sense as a model than a movie.

Personally, I’d go with a variety show approach, specifically those old-time Christmas specials. You know, like when Judy Garland sat at home over-imbibing while an endless array of her famous friends “dropped in” to decorate the tree and sing a song. Only in place of Dean Martin (no one can truly replace you, Dino!) it could be Joaquin Phoenix, and instead of sipping punch and singing “Silver Bells,” he would present supporting actor. (Though, honestly, I would sit through three hours of anything if there was even the slightest chance of seeing Joaquin Phoenix sip a little punch and sing “Silver Bells.”)

Then, as he exited, he could exchange a little socially distant banter with Laura Dern, who just happened to drop in to present another award.

I have long thought that the thing the Oscars needs most is one of those old Christmas special sets, with the cool living room sofa, the baby grand and that front door through which all the guests enter. Especially this year, when, until recently, so many of us have been unable to cross any threshold but our own. What better way to capture the mood of “opening up”?

But it would work only if there is a host, and this year there isn’t one. Because there are no hosts in movies, except, of course, in “Parasite” (cue laughing Brendan Fraser gif.) On the other hand, after the year we’ve had, the sight of a bunch of movie stars in fancy clothes may be enough to hold our attention for the length of “The Irishman,” and with or without big audiences, all the nominees did very fine work that deserves to be recognized.

More important, the people who will be honored Sunday night have already achieved something no other group of Oscar nominees ever has. In a time of international crisis, when so many of their colleagues were worried about box office, big screens and the threat of streaming services, they bravely kept the film industry going even when theaters were closed.

And that was definitely an Oscar-worthy performance.